'Literate and fun to read, this... is equal parts Philip Roth and David Lee Roth.' 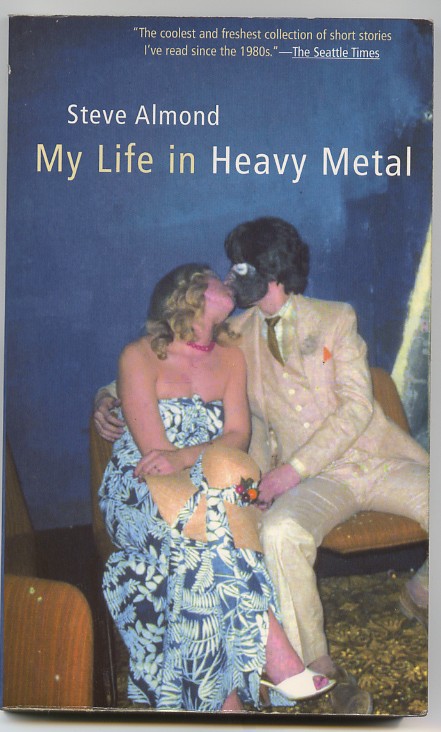 Billed by the Seattle Times as 'The coolest and freshest collection of short stories since the 1980`s', Steve Almond's: My Life in Heavy Metal is a smarmy, hip and vicious attack on static thirty year-olds trying to find their way in modern uncertain times.

Postgraduates, heckled as 'markers of time', are frequent targets though newspaper interns, office computer geeks and overseas English teachers all get their due. In the excellent title story, My Life in Heavy Metal, an obit writer at a local paper establishes a futile relationship with a bespeckled swimming instructor whose 'wet, ordorless orgasms' fail to wash clean his guilt about two-timing beautiful Jo. Never satisfied and ever the music geek, the ambitious writer takes a gig writing metal reviews of Motley Crue and Poison. In a hilarious misadventure, skeptical Jo is brought along to witness the Masters of Puppets for herself:

'At my first concert, Metallica, the bands new bassist introduced himself to the crowd by farting into the microphone. This was the heavy metal equivalent of a 'bon mot.' As the narrator searches the crowd of males there are 'twenty heads banging in unison, like angry mops.' Next, in comical and a self-pitying parody, we return to the apartment where 'the shower in my place was like being spit on.' Literate and fun to read this story is equal parts Philip Roth and David Lee Roth.

However this is not a book about rock n roll, more about the coping strategies of young men and women, confronted with the realities of work after graduate school. In Geek Player, Love Slayer a girl loathes herself for obsessing over a sexy IT guy – until she realizes he lives at home. In Run Away My Pale Love, set in Poland, an English teacher questions the futility of trying to bridge cultures by marrying his pupil. As he obsesses over his dilemna, he remarks:

'I could see her at sixty with a bolt of white hair and skin too tired to shine all the time.'

Poignant and, at times, touching the relationship between Mamu and daughter Basha is most telling: 'they were deeply in love, as mothers and daughters sometimes grow to be without the interfering needs of men.'

These are enjoyable stories with a couple of weak ones such as The Law of Sugar and The Last Single Days of Don Viktor Potapenko thrown in. However there are many more fine flourishes like these from The Pass: '(she) removed the purse from her lap... on which it sat like a small guard dog.' However, be warned! Like in any sound check there are a couple of glitches. One short story less might have done it. And, at times, MLIHM is verbose and awkwardly wordy - even the fine RAMPL has own 'bon' skullduggery - 'its' twisted calculus of wish fantasy'(What? ed?) and is occasionally 'poorly versed in the mechanics of regret' (ed?).

But petty bitching aside this is a bitch of a book and good like the old Van Halen.
Reviewed by
John Stiles

More on Music and Books here and here.