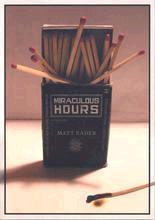 Miraculous Hours, Matt Rader's début collection of poems - an extraordinary rendering of a poor rural Canadian backwoods childhood - takes place in a remembered world of poverty-stricken backyards, trucks, porches, creeks, swamps, and badlands, seething with menace, defilement and asphyxiation. Tyres are spent, windows fogged up, cars rusted, ants dismembered, cats flayed, girls raped and murdered, stolen armchairs sink into the earth - while the kids run wild, get wet, have accidents, get high, get drunk, get uncomfortably sexy and learn to smoke in a 'damp and mildewed inner dark' while somewhere in the background the exhausted mother is giving birth and Dad curses the 'corroded flashlight batteries'.

The book is divided into sections, beginning with "Prologue" - in which the poet has the reader witnessing his somewhat histrionic - but in poetic terms - strangely successful act of hammering a six-inch spike into the wall above his desk and slightly injuring his hand in the process: 'The walls are ready to talk.'

What follows is "Exodus": a bunch of lushly lyrical poems evoking the poet's own birth, friendships formed in acts of cruelty to animals, childhood acts of pyromania, taking pinches of his father's ashes and hanging around in the woods, exploring fearful things, committing acts of daring and coming to harm.  There are also some very fine animal poems: "Pike" is one:

now, noosed in a knot of water, draws me deeper
to sleep and follow -

It would be easy to give up
but for the despairing and obsessed
instrument of your heart,
with its valves and chambers
and Macchiavellian pipes,
its terrible there-for-life-drone notes
its devoted unholy commotion.

Mentions of blood, bone, earth, dirt, mud, ash, silt and garbage abound.  What appears to be going on in these poems is a morass of chaotic matter (living, active, bleeding, dead, decaying) primitive urges and violent acts inside which intimations of meaning struggle towards their birth. If I have any criticism to offer, there is perhaps just a little too much in the way of epiphany and portentous overkill.  As I read on I am aware of experiencing an occasional comic effect - jarring because I sense it was not intended.

"The Land Beyond", the other half of the book takes the reader into a slightly different territory; the themes of cruelty, violence and death are ever-present, but the 'I' of the poems is older and the tone more conversational and ironic, and there's "The Apartment Tower", a cityscape although it is portrayed from the perspective of his rural origins. 'Rules state no pets please over the weight of a cigarette', he complains. "Scavenger Hunt" is the one poem this collection that comes closest to being a credo poem. The poet appears to be 'scavenging' for material to include in poems:

And the there's the esoteric, the out-there, the just plain weird:
A strand of Woolman's neck hair, a bite of bologna in the shape of a deer.

Wondering about Matt Rader's influences, I get a powerful whiff of the dog-eat-dog dynamics of Golding's The Lord of the Flies, a lyrical quality reminiscent of Dylan and Credence Clearwater Revival, sometimes a sensibility akin to that of Blake's Songs of Innocence and Experience, and moral punch and bucolic undertow of  Steinbecks 'Of Mice and Men'. This is a book to read and re-read.

Bio: Annie Freud was born and brought up in London and now divides her time between Sussex and London. She works as a teacher and embroiderer. Her first full collection will be published by Picador in Spring 2007.