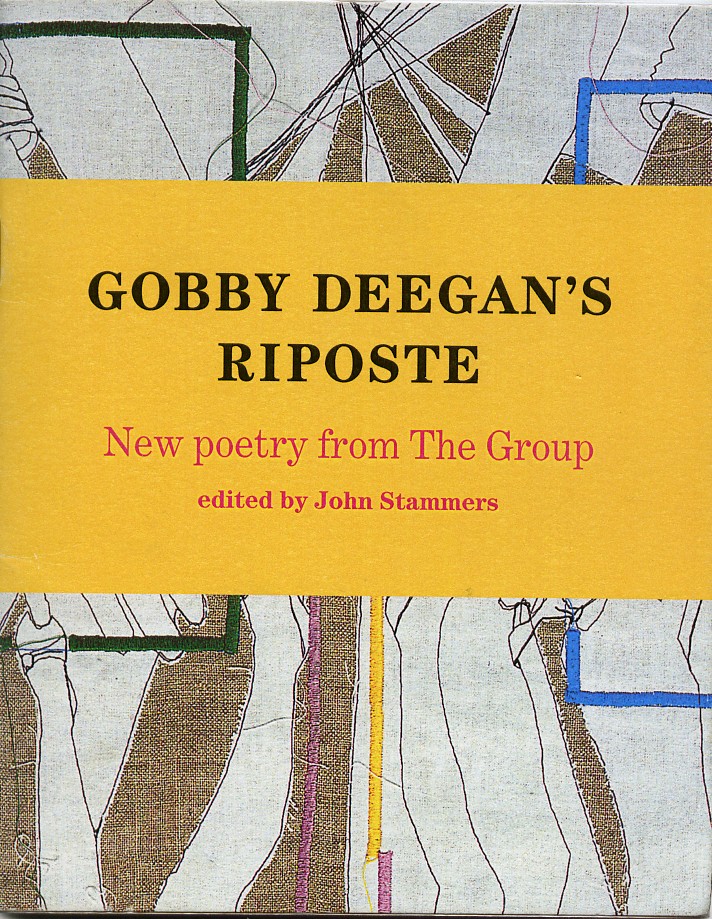 Good chapbooks of quality writing exist in Toronto: Junction Books has published some fine poets in Adrienne Weiss, Paul Vermeersch, Adam Getty, Ray Hsu over the past couple of years. In Gobby Deegan`s Riposte London poet (and 2001 Forward/Waterstones Prize winner) John Stammers has selected some fine writers from a writing class and produced a short, compelling and imaginative little book. The mot du jour of the poetry community is 'Chapbook' spat out in some circles as 'Crapbook' but that is not the case here.

What is nice about the writing is the understated tone of the work. These are not the words of the lively young turks of the open mics, rather the musings of pensive and articulate souls. Take the paper hat, paper hat and undertow? of Susan Grindley`s Discovery. Are the words, simply notes-to-self scratched into the margins of a newspaper, missing words from a crossword puzzle? Or a code to a secret bank account in Paris? Like a thriller writer, Grindley creates intrigue from the mundane. In Grindley`s The Doyenne, the narrator hopes, perhaps resolutely, that 'young men will fight at my signings to hand me a pen but that (she) won`t have to listen to them.' Cleverer and more imaginative perhaps, is the title poem Gabby Deegan`s Riposte:

'All them bad things you says I is, you is all them things also.

Them bad things you says I is, you is also all them things.

Bad things, all them things...'

Repeated in different combinations and to different effect fourteen (14) times.

Annie Freud`s The Study of Disease is painterlike and contains all the usual themes of good poetry: sex, death, disease, nastiness, affairs of the heart, femininty, eggs, ovulation. The narrator sets the tone with a 'heart which thumped like a boot against her ribs.' In The Symbolic Meaning of Things and Reasons for not Dying:

'I stood at the Centre Point, soaked to the skin,

fighting the habits of my filthy mood...

...a libidinous negligee ripped to shreds...'

Rosin Tierney`s Lucid Interval has some of the earnestness of almost good writing, a little dud in the 'as water reflected light and not the inner workings of your soul.' Anna a better poem sparkles with promise:

'Wild-out she was, running through Brixton...'

Other fine poems such as Valerie Joseph's Green Minx and Sinead Wilson`s Victorian Lovemaking round out the collection from the ladies.

Though a little light on the male offerings - there are three male poets of ten - all three of the men, Graham Mummery, Edward Barker and John Stammers write of being outside. Not outsiders, but battling, or noticing, the elements. Whereas there is a tinge of eroticism in a little of the womens work, the men are more stoic or else their poetry presents them as such. Mummery`s Winter Task is an open meditation about writing a poem about the the menial tasks of life outside the flat with Mozart's music offering a temporary reprieve - even if, as Mummmery states - later, you throw the poem away. In Laden, Edward Barker, sees the tree fall 'become a wish.' For what resolution? Inspiration? We are left with a feeling of a mind in suspense. With In the Marshes, John Stammers, the most well-known and celebrated of the poets observes the sky, a bird:

'...the skylark engraves the sky

with the Spirograph of its release:

absorb the men, they tramp beneath the cry

This is a tight little collection bristlings with some lurking but understated talent.