Originally from Grosse Pointe Michigan, USA, Halli Villegas now lives in Woodville, Ontario. Her first book of poetry Red Promises is now available through Guernica Editions. Watch for her Spring Launch in May, 2001 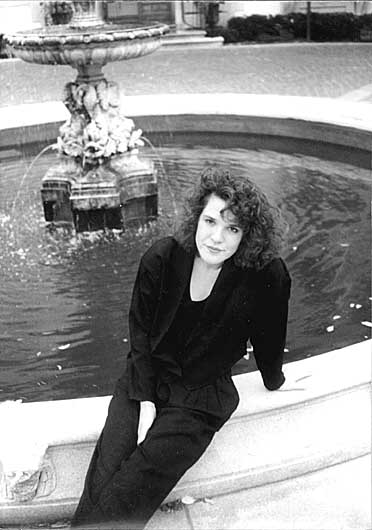 Q: So Halli, why do you write?

A: I write because for me images become words and words become images. I
get obsessed with putting them in a pattern. Then I have something for
show and tell, not just my collection of troll dolls or a shell from
last year`s trip to the beach, but something really cool that my parents
probably didn`t want me to bring.

Q: In this sped up, modern society, what makes you think anyone will care what you write?

A: Will anyone care about what I write? I don`t know. I know I care about
what I write, but not everyone cares about the same things. I might be
absolutely fascinated with my story about a crippled dwarf Elvis
impersonator and his affair with a Vegas showgirl, but most people might
say: "Who the hell cares?" That`s why the trick is, the hard part is, to
write well so people are swept away by the dwarf and the showgirl before
they remember they were really looking for a book about an Inuit`s
romance. Of course you have to get serious readers to pick up a book in
the first place, which is why you need attractive nudity on your cover,
and, on the back, a blurb implying tasteful sexual content .

Q: Do you think that writers live on the fringes of mainstream society?

A: Writer`s are not on the fringe of mainstream society. Writer`s have
their own, parallel world which consists mainly of pressing our noses to
the glass of mainstream society, then running home to write down all the
good bits and going out for a drink. This appears to make mainstreamers
feel a bit put out. You,d think they`d be flattered. Instead they
start this myth about writer`s having a grudge against them. That`s
just the mainstreamers wishing they could watch, write and have a drink
once in a while. The only real grudge I think writer`s have with
respect to mainstream society is the consistent lack of humour
mainstreamers seem to manifest in regards to just about everything.
Of course no one has time to read my work or anyone else's. The media
keeps telling us people don`t have time for sex, sleep, their children,
let alone reading. Still there is the rising popularity of poetry, the
success of Oprah`s book list, stores like Indigo. I think it is the
beginning of a backlash against today`s society, people are reading to be
subversive. The people you want to read your work, will make the time
to discover and read it. Revolution.

Q: What do you, an American, think about the Canadian Literary Establishment. Do you think that your writing has a place in the Canadian marketplace or do you think we are too obsessed with CanLit?

A: I love the idea of a "Canadian Literary Establishment. It sounds like
they have parties where you have to have a secret literary password,
like an opening line from an Earle Birney poem to get in. Once inside
they all sleep together and plot to scuttle the careers of aspiring
young novelists. The problem is, being from the states, I don`t know
who the players are. So at some function I`ll blithely chat away,
adjust my bra strap, compliment someone's clothes and afterwards a
friend will say to me, "I can`t believe you just said that to so and so,
he/she is the greatest, agent, author, editor etc.. in Canada!" Then I
get depressed because I missed my chance to be witty and Canadianly
clever and maybe get a pass to one of there parties.

Q: What do you think about arts funding? Mordecai Richler has said that it breeds mediocrity.

A: I believe there can never be too much money for literature. Let`s just
spread it around a wee bit more. I`m not sure Margaret Atwood needs
more money to help her survive while she works on her next novel, though
I may be wrong, but I know I sure do.

Q: What about the writing process? Do you think, as Hemingway said, that we must be courageous and exist in a state of grace under pressure?

A: To get anything going, to be fruitful, you have to sacrifice something,
prune that tree. That`s not always a happy thing. Being compelled,
obsessed is not always the most fun. Still I think all creative types
have the capacity for at least occasional happiness. I mean if your a
writer then writing, should on the odd occasion make you happy,
otherwise why do it? The rest of the time, there`s always Prozac