Canadian poet Heather Taylor appeared recently at The Spitz Pub in Spitalfields Market at one of the local London poetry gigs, sponsored by local London poetry scenesters and publishers Penned in the Margins. The evening was set in a cabaret environment with an attendence of around 70-100 people set around tables with candles, bottles of champagne, and snacks. The mood was calm but also excited - headliner Anthony Joseph (and band) were expected late from the World Cup in Germany 2006 where they were watching Trinidad/Tobago (ed. note population 2 million ) cause fits for England in footy.  Arriving a little late I was able to catch Heather's set, as well as a little of Ventriloquist, Sore Throat, and of course, headliner, Anthony Joseph. Lots of tall skinny, hot goths/rockers stood in the back and a few nodded cooly to the goings on. The Anthony Joseph fronted trio consisted of rap poet/novelist, Anthony Joseph (with a new book The African Origins of UFO`s with Salt) a cool but amused bassist and a young, hooded flutist. It was a soulful blend of Tobago reggae, meets Yes. No? Okay, think rasta with a hint of Jethro Tull. Not my usual ting but this soul brother is the real ting. Friggen Rights. 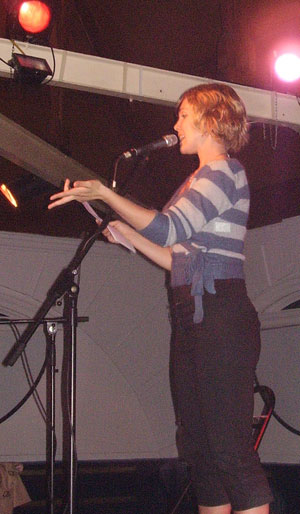 Heather, an Edmontonian warmed up the crowd with a reminder that they could all relax, she wasn`t an American and then tore a strip off the Edmonton Oilers who had just lost the final game of the Stanley Cup Playoffs. Reading and performing poems ( with guitar) from her new book Horizon & Back from Tall Lighthouse Books she was a glint-in-your eye-crack-me-up in the vein of Jan Arden meets Joni Mitchell. With an acting background and experience in Vancouver film sets and a gig or two interviewing bands such as Sloan and the smalls and an accomplished history of acting, performance, and an interest in examining social standings this is a compelling mix. So how is that for a warm up act?

Afterwards I grabbed a scap of paper and conducted the interview in the downstairs patio/bar of The Spitz.

A: I won a contest at Travel Cuts. It was a trivia contest. Seriously. I didn`t know if I`d like England. In fact I even was worried that 'I won`t like England.'

Q: How did you get started in performance poetry?

A: I`ve always written poetry. From about grade six. But when I first came to the U.K. I was working in Ireland doing work on a corporate video. I was talking into a teleprompter and I said to myself:  "Why am I doing this?"  Afterwards I found the Aromapoetry open mic nights in London. There was an event in Oxford Street. I went to perform there. The thing about it is there are no boxes around you. No one you know is coming. It`s just you and other strangers.

Q: You`re a long way from the West of Canada.

A: Yes, I started in Calgary then I was in Vancouver. I was getting further and further away. It was like I was always reassuring myself as I left Edmonton: "I can still go home, I`ll be all right."

Q: So about the new book Horizon & Back?

A: 'It's with Tall Lighthouse Books. It`s been really good to work with the publisher, Les Robinson, it wasn`t a rush job; they`ve put the book through several edits. After it was done they said: "Do you want to do a book tour?" I said, I`d like to do a travelling show. So me and another of the poets, Aoife Mannix are organizing an event as a team. We`ve gone to Brighton, The Poetry Cafe, The British Library (in conjunction with the BBC), The BAC (Battersea Arts Centre), Exeter, and now we`re going to Ireland. We`re going to town!

Q: Tell me about your collaboration with Aoife Mannix.

A: We were writing poems on a web site. We were reading each others work and working off each other. We decided to write a poem every day to challenge ourselves to write, so it was a kind of collaboration. I think we are both outsiders in a sense and we work well together. She, Irish and me, Canadian. You know it took me a long time in this country to figure things out. Like what`s a Blobby? (um...ed. note. Mr. Blobby?) It is not something that is in my past. Or if I had a boyfriend and I mentioned Macleans (Magazine?), he might say: "Why are you going on about toothpaste?" You know, Mr. Dressup won`t go down over here.

Q: So the tour will end in Ireland?

A: Well we`re trying for Canada, Aoife used to live there as a child. Everyone thinks of Canada as a magical mystery place. So we`ll see.The thing is its weird, people always leave Ireland - to go to Canada. But now that`s changing, people are going to Ireland and Irish people are saying: "Why are people coming?"

Q: What`s the weirdest place that you ever did a reading?

A: A squat in Amsterdam. I was hit on by Lesbian girls in between sets by Punk bands. I thought if I can survive this, I can survive anything... Glastonbury was nice...

Q: Any references to Canada in your work?

A: Of course coming from the prairies there is imagery everywhere. I always try to compare skyscrapers to grain elevators. You can see those on the front cover of my book...

Q: You mentioned that you are interested in social inequalities, do you mean life in England?

A No I take it from my own life, when I was young my parents divorced. As soon as that happened I notuiced that people started treating you differently; my father was an accountant, we had money. Afterwards we were poor. And I noticed how people treated other people differently. In school. You went from having the lead in the main play, to not even getting the part.

Q: Does this show up in the book?

A: It is in there with the relationship stuff.

(Writes in Book). Thanks.