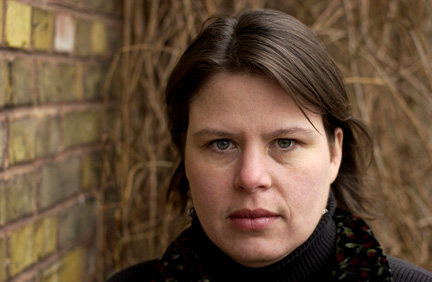 BIO: Kathryn Kuitenbrouwer is the fiction editor at The Literary Review of Canada. She has been published in Prism International, Blood & Aphorisms and Smoke and has fiction forthcoming in Prairie Fire. She has written reviews, feature articles, and conducted interviews for various presses -- The National Post, The LRC, TWN, Books In Canada. She was born prematurely in a fragrant cedar forest in the Ottawa valley; nobody thought she would live.

Q: Why do you write, Kathryn?

A: I've found most other jobs at best tedious at most fodder for stories. I'm compelled (I know that sounds facetious but). What it boils down to is that's all I can do. I've created a situation in which I'm not much good for anything else.

Q: As an editor for the Literary Review of Canada what do you look for in
the poetry and fiction that is sent your way?

A: I don't deal with these aspects of the magazine. I wish the LRC printed original fiction but it doesn't. It is a review forum so I mostly solicit and edit reviews as well as conduct the occasional interview.

Q: You are married and have three kids? Where do you find the time to work on your own work when your life is already so busy? Do you talk to your kids and husband about your work, intergrate them and tell them about your stories, your ideas and characters or do you have to have a very private realm for your work, outside of your family? Margaret Laurence found time for both and so did Carol Shields and Mordecai Richler. Maybe this is the secret of the successful writer. What do you think?

A: Well, John. I hire a babysitter. Not very romantic but there you have it. My children know I am a writer and they are very curious about the idea of earning money from writing. They think it is enormously wonderful that one could earn a hundred dollars from a short story -- almost two years allowance! I do not talk about my ideas etc. much until they are down on paper. Then, I have several friends who read my work. So, yes, there is a privacy to it but once I've got something, I have it read. More and more I'm finding the editing part of the work the most important in terms of learning craft, establishing voice, that sort of thing -- you know, forming the story.

Having children, the very act of having them but also caring for them has made me far more disciplined. I do not stare at the blank page hoping for my muse to descend. I don't even go to the page until the story is formed in my head. I don't have that kind of time to explore my ideas on paper and then eke out a story, I explore things in my head while I proceed with the banalities of day-to-day chores -- epiphanies in the laundry room, that sort of thing. When I have enough of a story to get to work, then I sit down. I certainly don't presume that having children is the secret to success -- Gertrude Stein, Virginia Woolf were without offspring. I think the secrets to success are talent, tenacity and hard work. A massive ego helps too, of course.

Q: Do you think that the Toronto literary community is too small and insular and that, as Joni Mitchell famously remarked of the music business, Canada eats its young? i.e. digruntled and envious writers bitch and moan when another writer gets a larger advance, instead of congratulating
them.

A: I'm not in the community enough to say. Are they really so disgruntled? Maybe it hearkens back to that $100 a story issue. Being a writer precludes a sort of passion otherwise who would do it? It is very demanding mentally with very little recognition (alot like housewifing -- except there is no chance of merit for greatness in that realm -- no domestics Giller prize!).

Q: Do you think that writers, famously mean to one another, can be encouraged to relax and lighten up and have a little fun, like musicians. Or is that an anti-writer type personality behaviour? A friend has said that writers fight so much because there is so little at stake. Also I heard that Tim Robbins, who wrote the Dead Man Walking screenplay once tell his wife that he could handle criticism of his acting, but not his writing. What do you think about this?

A: I think the writer's ego is pretty vulnerable -- the bigger they are the harder they fall. Writers lay themselves bare in their little darkened rooms; exposure is part and parcel and yet...what disparity! The need to write is something almost borne of insecurity and yet it is connected so fundamentally to this need for recognition. The duality is bizarre. And then the opportunity for that celebrity is very limited -- think, all those egos playing at God (the ultimate author, I suppose), wanting the lamplight. If we are testy, little wonder. There is a kind of personal humiliation at stake.

Q: Do you think there is a healthy crop of new fiction writers and poets emerging in Canada? If so who are they, in your opinion?

Q: As a grant recipient what are your thoughts on the process. Do you think it buys time for growth and development (as is suggested) or do you think as Mordecai Richler and Alex Colville have said that government grants encourage mediocrity as many grant recipients are not obligated to produce with the money, though or course this is encouraged.

A: It certainly encouraged me. I don't think it affects my work -- how can it? I don't know how to work except how I work, you know. If one was obliged to produce then that would certainly encourage mediocrity. Or so it seems to me. I think it should be viewed as any other credit -- you've been honoured, then, get on with the work. Very simple really.

Q: You have told me in conversations that you have spent a lot of time tree-planting and working in a lumber yard. Pearl Luke recently wrote a great novel about Fire Towers, Burning Ground. Is this outdoor experience going to be a theme in your future writing?

A: I spent several summers up north tree planting and I logged in Belgium for about a year and a half. I like these wastelands to come into my work. I have a tree planting story coming out in Prairie Fire called The Last Magic Forest which is set on a bear stinking plot of land in the swamps of Northern Ontario. I'm working on a final draft of a story set in a forest in Flanders. Trees have a majesty that impresses me for they are simply plants after all. I once watched a three hundred year old oak tree being felled; it took about half a day. All the branches were removed in situ and then the logger took this huge chainsaw blade and fixed it to his saw. People were crying. The tree was as old as the castle that it was planted near. A person had planted the tree, a series of gardeners had tended it, trimmed it and helped it survive in various ways and for centuries and then person felled it. I found it fascinating and intense -- that connection between man and his intentional landscape. So, yeah, gardens of all sorts interest me and feature in my work.

Q: I was watching Jonathon Franzen on Charlie Rose the other night and he said that writers are pretty much not doing anything of great social value. He said that we are simply telling stories and that he was disappointed to realize after some time defending his great ambition to tell, in fiction, why consumerism and technology were evil, that what he had to say, which was of any specific value to his readers, was simply about the tensions and dramatics and heartbreak of family. What do you think about the hip and technologically satirical writing of say Douglas Coupland, the now largely defunct postcard fiction trend of Glossy Magazines from a few years ago? What do you read and what do you think about the bulk of the stuff coming out at the moment from the small literary presses like Insomniac Press, Pedlar Press, and ECW Press who are known to take more chances, but also to publish some largely ignored work.

A: I don't really have an answer for this, John. Trends kind of baffle me. Interest in trends is even more baffling. You can't write to it, I don't think.

I'm reading a Granta magazine right now. I just read four Audrey Thomas books in a row (I interviewed her recently), Richard Ford's A Multitude of Sin, Ian McEwan's Atonement. I read pretty obsessively. I like John Fante, Knut Hamsun, Alice Munro, Katherine Mansfield, Mavis Gallant, Greg Hollingshead, Matt Cohen, Raymond Carver, Virginia Woolf, Penelope Fitzgerald, Lorrie Moore to name a hodge-podgey few. I read the work of authors I feel I can learn from. I read critically and analytically -- for pleasure too, of course, but I do find the intellectual exploration of "How did that writer do that?" very exciting.

The small presses provide a service to young and unconventional writers that the large presses won't. So obviously they are very important. Small presses, particularly Pedlar Press and Coach House put a lot of time and consideration into presentation. I just bought a book of poems by Karen Presse (Pale Red Shoes, Pedlar Press) which, beside being quite a lovely book within, is a beautiful object as well. What I think about the bulk of stuff coming out of these presses is pretty much what I think of the bulk of stuff coming out of the large presses -- it's a crap shoot. All these publishers are working with what they get. Sometimes publishers (big and small) push out material before it's ready. And, of course, that is unfortunate for everyone.