Toronto-based writer John Stiles chronicles three years in the life of Alberta`s indie rock cowboys, the smalls as they tour across Canada, France and Belgium.

Blending studio footage from 1998`s 'My Dear Little Angle' recording sessions with the churning Prairie mosh pits, the daily squalor of the cube van and the hip and alternative subcultures of Belgium and Amsterdam, 'the smalls...er whatever' charts the highs and lows of a unique Canadian phenomenon which Stephen Humphreys of Exclaim magazine says is 'the closest thing the rock world has to a collective organism.' 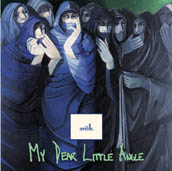 The smalls...er whatever is a co-production between Insolent Boy Entertainment Inc., smallsong recordings and is made possible with the financial assitance of Much Music. The director would like to thank the following for their continued support help and dedication to this project: